As evidenced by the above screenshot above, it is obvious that they have a ton of backlinks. Referring domains means the amount of websites that link to them and backlinks means the amount of pages that link to them. In other words, this website has ~7000 websites linking to them form 319,000 pages. You can also see that they rank for 101,000 different keywords which generates them 132,000 visits per month. If they were to pay for this traffic using Google Ads  then it would cost them $3.4 million dollars.

Now that we have the basics out of the way, let’s take a look at what websites are linking to them.

Now as highlighted by my fancy red circles I’ve selected only one link per domain and only dofollow links. This has narrowed us down to 2075 links we can take a deeper look at.

What a surprise! Pure spam bro. The first one, which is the most powerful link in terms of domain authority is an online pharmacy store with a an exact keyword anchor text. In fact, none of these links would be considered anything other than spam. The last link, icdri.org is the only one that could loosely be considered relevant but even in this case if you go to the website it’s an obvious link farm with no quality moderation. If you simply make a donation to this website, they allow you to place a link which the spamsters at ForThePeople.com obviously have done. Or, more likely, their unscrupulous SEO team. If you look under the Ext. column you can see this page has 501 outbound links on it, pretty high there buddy!

I’m not aware of anything like that. Usually the problem is more the rest of the site (like when there’s a lack of real, unique, compelling, high-quality content) rather than the links.

According to Google’s John Mueller there’s nothing inherently wrong with a high amount outbound of links, but paid for links (donations) are definitely not good as explained in this tweet:

If you’re not getting paid for those links, if there’s no “scheme” behind them, if they’re not dropped by random internetizens: just link naturally, as much as you want. It’s a web, not a Tupperware box.

Annnnd regardless of what Google mon says it still dilutes the quality and amount of link juice a page has to send on. In other words, even if I wasn’t worried about a spam penalty I still wouldn’t donate $5 to get a link on that page because it’s not passing any juice along.

Let’s see how far we have to dig until we find some legitimate backlinks: 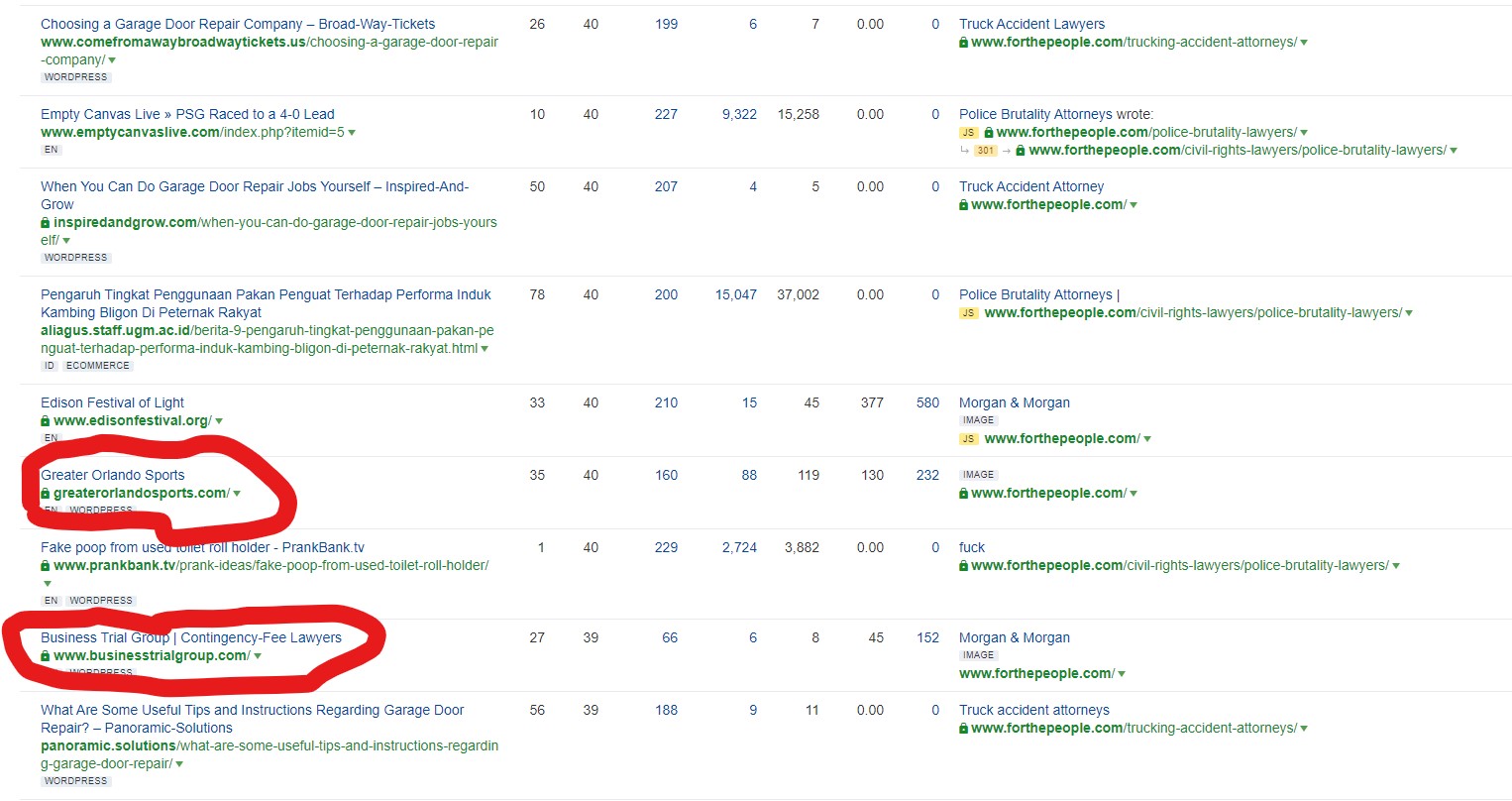 Now granted I didn’t check out these sites all individually but I am assuming the broadway tickets website with an article on garage door repair linking to the truck accident practice area page probably isn’t natural. The two that I’ve eloquently highlighted with red circles seem to be somewhat natural. If I was a manual reviewer I would throw these into the spammy category. The Greater Orlando Sports because it’s a local sponsorship and I’d conclude that it’s with SEO in mind. The business trial group is a website they made and maintain, in some scenarios I’d say it’s legit but with the full backlink profile in mind I’d say it’s an attempt to manipulate search engines.

Note: I noticed that the link from prankbank.tv has an anchor text of a four letter word that’d make your grandma blush. No right minded SEO would do this, which makes me think perhaps ForThePeople.com has been attacked by a negative seo campaign. I’m writing this stream-of-conscious (shocking, I know) so I’m not going to rewrite the whole post because of this revelation, we’ll just keep it in mind for now that maybe this is why their backlink profile is so spammy.

Finally, we arrive at this gem:

This is washingtonpost.com article talking about John Morgan of Morgan & Morgan spent a bunch of moolah trying to get medical marijuana in Florida approved. This is the first legit link I’ve found in this cesspool of doo doo backlinks.

With that being said, and without any conclusion on whether or not this is a backlink profile of a negative seo campaign or not, I am going to wrap this up because I am way past the 500 word mark already and that’ll do it.